Hive has a “reputation” score built in and you can easily see it while looking at a user's profile on most front ends. Reputation is a quick way to assess a Hive user's credibility on the chain. It's not perfect, but generally speaking, Hive users want to build up their reputation.

The reputation score starts out at 25 when an new account is initiated. Then, it changes due to upvotes or downvotes. The flowchart below is an attempt to explain the process. 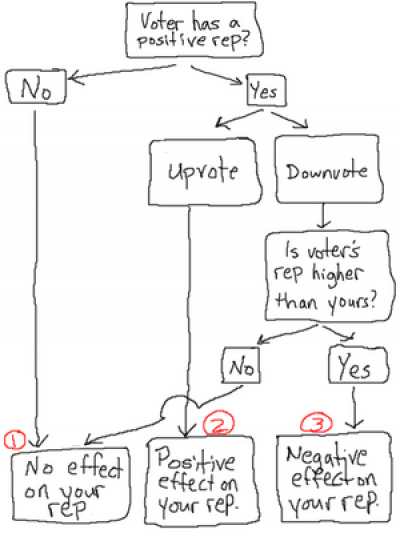 Reasons for a reputation score is to combat bad actions like plagiarism (which Hive takes seriously…don't do it), hate speech, scamming, or spam. All of these could earn downvotes.

Hive usage cannot be censored (Hive is censorship resistant), however downvotes can push down a user's reputation and Front ends usually elect to hide users who fall below a certain reputation level. It's important to remember that, even if a front end hides a user's activity, that user's activity is still on chain. It can still be seen using Block Explorers like Hiveblocks.com.